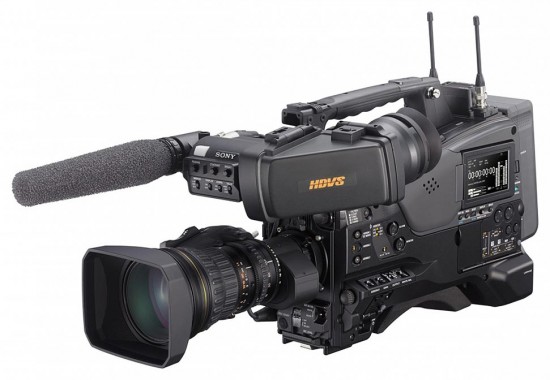 The PXW-X500 offers a powerful “Slow & Quick Motion” function and using the XAVC codec, the camcorder’s highest frame rate can reach 1080/120p, five times higher than the normal frame rate of 23.98p. This performance is realized by the newly-developed CCD image sensors and the camera’s powerful image processing abilities.

With a built-in wireless module, the PXW-X500 can be operated from compatible Wi-Fi devices such as tablets, via the supplied IFU-WLM3 USB wireless LAN module. In addition, proxy video files can be generated separately from hi-res files and recorded to an SD card. In 2015, the wireless module will be able to output the streaming of proxy content over Wi-Fi or LTE (Long Term Evolution) networks. The streaming function will also be available for Sony’s PXW-X180 XDCAM handheld solid-state memory camcorder, which became available in August 2014.

Also available from Sony is the new PMW-RX50 XDCAM Mobile Recorder, featuring a compact and lightweight design, and SxS recording and playback capabilities. The PMW-RX50 supports the XAVC Intra 4:2:2 1080/59.94p and XAVC Long 4:2:2 1080/59.94p formats, as well as traditional formats such as MPEG HD 4:2:2, 4:2:0, MPEG IMX and DVCAM. It pairs seamlessly with the PXW-X500, especially in applications like field shoots and on-site location shoots.

Key Features of PMW-RX50 are:

The PXW-X500 and PMW-RX50 are planned to be available in October 2014, with suggested list pricing to be announced.