GoPro announces global availability of its new line of next generation HERO3 cameras. Debuted earlier this month to global media, the HERO3 is now shipping worldwide and is available in three models. GoPro’s flagship model, the HERO3: Black Edition, is the most advanced GoPro camera ever. 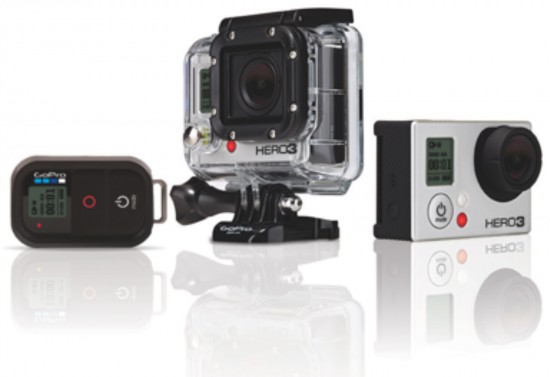 “The HERO3 makes it easier than ever to capture and share immersive and engaging footage of meaningful life experiences,” said GoPro’s CEO and Founder, Nicholas Woodman. “We’ve taken everything we learned over the past 10 years and put it into the HERO3, making it the most powerful and yet easy to use camera for self-documenting and sharing your life. Wear it, mount it, or hand hold the HERO3 and capture incredible footage that makes it look like a professional film crew is following you around. This is your life and you deserve to have a spectacular and entertaining record of it.”

Whether worn on the chest while skiing, mounted to a motorcycle to record a spirited ride, or worn on the head to document the birth of a first-born child, the HERO3: Black Edition captures stunning hands-free footage of your life experiences with professional quality normally seen only in professional productions.

Thanks to such professional results, consumers aren’t the only ones using GoPro to capture and share professional-quality content. Collectively more professional athletes, filmmakers, and creative artists are using GoPro than any other camera in the world to capture everything from competition footage to television commercials to feature-length films. As a result, GoPro has captured 95% of the global wearable camera market and over 20% of the global small form-factor video camera market, making GoPro’s HERO line of cameras the best selling small video cameras in the world.

“This is one of the most groundbreaking cameras to come out in recent years,” said Vincent Laforet, Pullitzer Prize-winning photographer and filmmaker based in Los Angeles. “GoPro has always been an enabling and disruptive company in that it makes the perfect tool to capture, experience and relive the moment for both consumers or professionals alike. Now, with the introduction of the HERO3 and it’s vastly higher performance, GoPro will become even more of a staple on professional production shoots – which is saying a lot for a camera you can buy at your local surf or ski shop. It’s a bit absurd in a wonderful way, really.”

11-time World Champion surfer, Kelly Slater, adds, “I first used the HERO3 in Tahiti during GoPro’s product launch video shoot, and the quality of the content we were capturing was mind-blowing. The most insane shots came from putting the GoPro inside the lip of the wave during ultra slow-motion shots and coming back out of the lip and into the barrel multiple times on each wave. I think people are going to be blown away by the quality and versatility of this even smaller and more powerful GoPro. The HERO3 makes sharing your own experiences even easier and I’m stoked to be a part of its launch.”

Weighing in at a scant 2.6 ounces, the HERO3: Black Edition is 25% lighter and 30% smaller than previous models.

The HERO3: Black Edition’s photo performance is 3X improved, now boasting 12MP burst capture at a staggering 30 frames per second with 2X better low light performance compared to previous models. Still Photo and Time-lapse Photo modes remain the same but are now joined by a new Continuous Photo mode that captures continuous 12MP stills at a steady 3, 5, or 10 photo-per-second rate, up to 30 photos at a time.

The HERO3’s reduced-distortion, 6-element aspherical lens combines with user-selectable Ultra-wide, Medium and Narrow field-of-views to deliver more perspective-capture options than ever before. Add the totally updated flat-lens waterproof housing that delivers stunning image sharpness both above and below water and you’ve got one of the most powerful and durable image capture solutions on the planet.

Understanding that sound quality is as important as image quality, GoPro engineers completely redesigned the HERO3 to be as adept at capturing the subtle, natural sounds of voice and music as it is at capturing the immersive sounds of sport. Also improved is GoPro’s already famous wind-noise reduction, ensuring that you’ll hear more of your passion, be it your engine or expletives, and less of the wind during high-speed activities.

The HERO3: Black Edition features built-in Wi-Fi and includes GoPro’s Wi-Fi Remote accessory. The Wi-Fi Remote is normally available as a $79.99 accessory but is included with the HERO3: Black Edition. The Wi-Fi Remote is waterproof, wearable and can control up to 50 Wi-Fi-enabled GoPros at a time from a range of 600’. The HERO3’s built in Wi-Fi means it can also be controlled by iOS smartphones and tablets running the GoPro App*. The GoPro App enables full camera control and live scene preview on any compatible iOS smartphone or tablet with support for Android smartphones and tablets coming Winter 2012.

The HERO3: Black Edition is available for US $399.99 and includes GoPro’s Wi-Fi Remote accessory, normally a separate US $79.99 accessory, at no additional cost.