Canon today announced the new VIXIA mini compact personal camcorder. The creatively designed VIXIA mini personal camcorder allows shooters to easily record their hobbies, special interests and memorable moments hands-free, and then share those videos and images on their favorite social networking sites or their own blogs via built-in Wi-Fi or via the free Canon Movie Uploader app.

The VIXIA mini features an ultra wide-angle Canon f/2.8 fisheye lens (160 degree movies / 170 degree photos) allowing a user to shoot from unique and creative perspectives while including their surroundings to make their videos and images more interesting. By utilizing the Wide Mode users can give the viewer a full view of their surroundings and then switch to Close-Up Mode to provide emphasis on a particular subject. 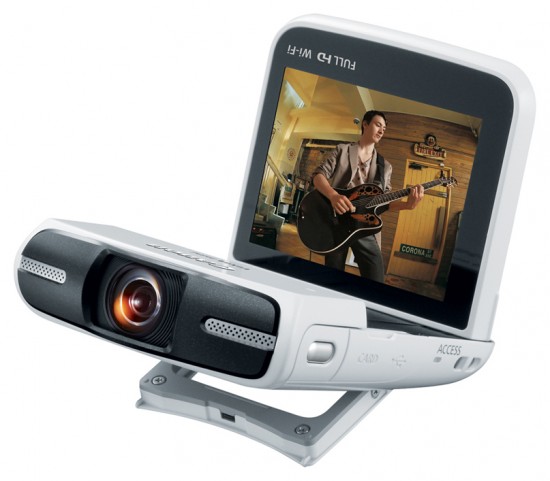 While in Close-up Mode, users can record a centered 1920 x 1440 resolution image with little distortion. They can also quickly toggle from one shooting mode to the other, or switch back and forth between video and image mode, by touching the camcorder's innovatively designed 2.7-inch capacitive-tilt touch panel LCD display. Attached to the camera by two parallel hinges, the Vari-Angle LCD monitor allows for various shooting styles, including low-angle shooting, normal and high-angle-shooting and self-shooting.

In addition, the camcorder's 12.8 Megapixel High-Sensitivity CMOS image sensor combined with the Canon DIGIC DV4 Image Processor creates the Canon HS SYSTEM, allowing shooters to capture and record stunning Full HD video in MP4 format as well as jpeg still images to a removable microSD card, all in the exceptional image quality standard that the Canon line of VIXIA camcorders are known for.

The camcorder's video image quality is further enhanced with the use of a Mechanical Shutter for the recording of moving subjects with little distortion. Beyond delivering high-quality video, the VIXIA mini compact personal camcorder also records high-quality audio thanks to its built-in stereo microphone. By using Audio Scene Select modes, users can choose an audio scene that matches their surroundings such as music or speech or even suppressing road noise.

In addition, the camcorder's 12.8 Megapixel High-Sensitivity CMOS image sensor combined with the Canon DIGIC DV4 Image Processor creates the Canon HS SYSTEM, allowing shooters to capture and record stunning Full HD video in MP4 format as well as jpeg still images to a removable microSD card, all in the exceptional image quality standard that the Canon line of VIXIA camcorders are known for.

Tools To Become The Star

The Canon VIXIA mini comes with a feature set that puts the user in the driver seat, expanding their creativity, allowing them to not only be the director of their videos or images, but also the star. Mirror Image Recording/Playback lets users view the scene they are recording in real time so they can watch as they record. So whether they are shooting their latest blog post about cooking a favorite Italian culinary delight, or filming a practice golf swing to help perfect their back stroke, the VIXIA mini compact personal camcorder is a versatile and convenient tool.

The camcorder's Smart Auto Mode allows the beginning user to capture those spontaneous moments with a touch of the screen. Smart Auto intelligently selects one of 38 predefined situations to give outstanding video and still image output.

The VIXIA mini camcorder comes with a built-in adjustable stand allowing users to tilt and elevate it up to approximately 60 degrees providing a new way to record video hands-free, and the camcorder's tripod socket also allows for flexible positioning of the device. And an automatic lens cover helps protect against scratches and dust when the camera is not in use.

Once a user has recorded their video blog, or a day at the park with the kids, it's time to share the video or images with friends, family and fans. The VIXIA mini camcorder comes with built-in Wi-Fi allowing users to quickly share their video and photos to social networking sites like YouTube and Facebook, or they can be sent directly to their PC. A user can also upload their video or still images taken with the VIXIA mini compact personal camcorder from virtually anywhere by downloading the free Canon Movie Uploader app onto their iOS supported device.

The Live Streaming feature allows for users to view and record on their iOS or Android device when they download the free Canon CameraAccess2 App.The Canon CameraAccess2 App is available for download on both iOS and Android supported smartphones and tablets. The Live Streaming feature also allows a user to control the VIXIA mini compact personal camcorder from remote locations.